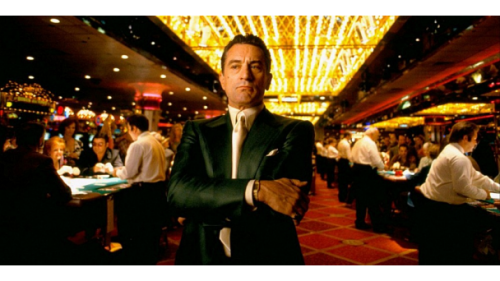 For decades, Las Vegas has been a favorite movie setting for producers, and why not? No matter the era, Vegas represents the same things: partying, losing inhibitions and a series of bad decisions. There are several Vegas-themed films I haven’t seen, including Viva Las Vegas (believe it or not), so this list represents only those movies I’ve personally watched. Feel free to make your case for other Vegas flicks in the comments.

Oh, sure, there are a few stinkers worth mentioning (Showgirls, anyone? That movie was HORRENDOUS!), but let’s just stick to the positive. After all, it’s Friday!

Believe it or not, there was a time when Chevy Chase was funny. As Clark Griswold’s nemesis blackjack dealer, Wallace Shawn steals each of his scenes. When I was a dealer in Vegas and would have to check a young guy’s ID at my table, I always said the same thing when I’d hand him back his ID: “Good luck, Mr. Pappagiorgio.” It’s a little sad to watch this movie today and realize Randy Quaid is now crazier than Cousin Eddie, and not in a good way. But we’ll always have Vegas Vacation to remember he used to be funny.

Perhaps this is more of a personal, sentimental favorite and not really a “Vegas” movie. However, a pivotal scene in this Albert Brooks comedy takes place at the old Desert Inn and has been a reference point for my brother and I for years when getting our brains bashed in gambling. I played at the Desert Inn on my first-ever trip to Vegas in 1999. For my money, the Desert Inn has heart.

Has any movie embodied what people hope is how their Vegas vacations turn out? Well, perhaps without the tiger and the naked Mr. Chow jumping out of the trunk of a car, but The Hangover captures the essence of a weekend on The Strip everyone wants: complete, unadulterated debauchery. After all, bad decisions always make for good stories.

I’m including both films here because, even though the George Clooney-led remake is phenomenal, there’s no way I could exclude the original Rat Pack flick from this list. Let’s start with the first Ocean’s Eleven: it is a time capsule of a Vegas era that no longer exists. Everyone and everything was wild, cool and swingin’!

Certainly, the Rat Pack version looks dated, but that’s part of its charm. And there’s one other reason this movie makes the list: Dean Martin. There is no one alive today who oozes that much “cool cat” awesomeness. No one.

The 2001 reboot is easily one of my all-time favorite movies. It’s smart, funny, witty and purely entertaining from beginning to end. You feel like you’re in on the caper with the gang.

The most incredible element to this movie: it’s a true story. Sure, the names were changed, but those characters were based on real-life people who are still legendary names in Las Vegas lore. My favorite aspect of Casino is the detail. They get it right on the gaming floor. For example, when Ace (Robert DeNiro) walks past a dice table and catches a dealer splashing a payout, he stops and corrects him: “Heel it off. Pay the bet proper!” From beginning to end, Casino is pure entertainment. It’s vintage Scorsese, vintage De Niro and vintage Joe Pesci.